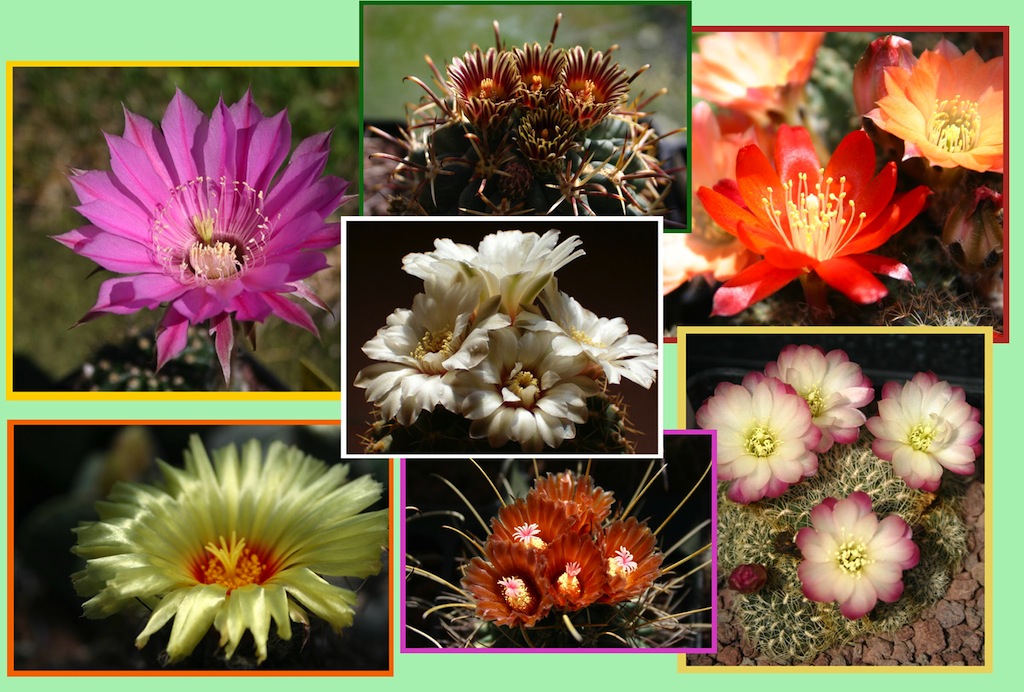 Colourful, flashy, ephemeral. Cactus blooms are sudden bursts of energy. Often the buds develop in a few days to open within few hours, amazing the newcomers to the cultivation of these plants and, above all, those who are not familiar with succulents. In these last few years, I have noticed that there is a lot of misinformation about cacti, in particular about their blooms. Those who do not cultivate these plants can even be surprised that they can bloom, no more or less than the specimens of all the other plant families, forgetting that the flower is the basis of the reproduction of almost all plants. Others are impressed to learn that even cacti can bloom in abundance and several times during the growing season, thinking perhaps that the flowering of a cactus is an exceptional event, almost unique. Nothing could be more wrong: all the cacti regularly bloom, and if there are relatively stingy species, that can produce few flowers for limited periods during the year, there are also really generous species, able to give blooms several times for entire months (for example Echinopsis, Astrophytum, Strombocactus, Gymnocalycium, Trichocereus).

If we have to find a flaw related to the flowering of cacti, this is in the fact that their explosions of colour are almost always ephemeral, not lasting.
Some species (such as Echinopsis and Discocactus) produce large, flashy flowers that open at night and last only a few hours, so that from the middle of the morning after opening they begin to wither and become withered within 24 hours. Other genera, such as Gymnocalycium, can keep them blooming for two or three days, which is about the maximum that we can expect from a cactus plant. Once ascertained this and accepted the fact that we can not expect from our cacti persistent and long-lasting blooms such as those, for example, of orchids, what can we do to maximize the production of flowers of our cacti?

Plants in the right age to flourish

The primary condition for flowering is as banal as it is essential. The plant must be of the age required for that particular species to flourish. For some genera, for instance, Mammillaria, Turbinicarpus, Gymnocalycium, Astrophytum, are enough from two to four years for having the first flowering. Other species require more time, flowering not before the age of eight or ten years (if not more, in some cases), as like Ferocactus, Echinocactus, Ariocarpus, Geohintonia, Aztekium. First, we must therefore know a minimum of the characteristics of the main species, for discerning, according to the age and the size of the plant, if we can trust in the flowering or if we will have to bear patience for a few years.

Here is a gallery with some spring blooms.

Once established that the plant is in the right condition to make flowers, the first rule in absolute is to ensure our plants a regular annual cycle of growth and stasis. Cacti and succulent plants, for blooming, need a period of whole rest, to recover the energies from the last blooming and to prepare for the next one.
For the vast majority of the species, this results in some months of vegetation blockage, months corresponding with our winter and with the prolonged drought season that these plants cross in nature. In summary, we can say that in Europe, from the end of September, the cacti (except some species, in particular, the Chilean ones such as Copiapoa and Eriosyce, then many Escobaria, Sclerocactus and Pediocactus) slow down the vegetation up to enter into stasis. From this period onwards it will be useful to reduce the watering until it is suspended for October (in Southern Italy it is possible to water up to November, considered the mildest climate). In this way the soil will dry completely, they will avoid dangerous stagnations of humidity between the roots, and the plants will begin to deflate in preparation of the winter.

In addition to the stasis induced by the season and the suspension of watering, temperatures are fundamental for flowering. During our winter we must ensure that the plants feel the cold, then keeping them outside the houses, in greenhouses, sheltered terraces, basement, etc. Except for the Cuban species (such as the Melocactus) and of other species growing in subtropical zones (for instance, Epiphyllum, Discocactus), the vast majority of the cacti, if kept in dry loam, can easily stand temperatures just over zero celsius degrees. Many species can go well below zero (Opuntia, Escobaria, Pediocactus, just to name a few), but we can say that the best is to spend the winter with minimum night around 5 or 7 celsius degrees.

The cold contributes decisively to the blooming, because, together with the dry, it puts the plants in complete stasis. Under these conditions the cacti block the growth, they rest, they recover the forces for restarting to vegetate in spring and to bloom regularly.

How, when and how much to water cacti and succulent plants?

Light even in winter

It is often heard that during the vegetative stasis the succulents can also stay in little or not luminous places. Many growers, during the winter months, keep them under low light or in garages. Now, if it is true that once the plant has entered in stasis the lack of light does not cause damage (the plant is in fact in a block and does not grow, so it will hardly be able to spin, that is to stretch and deform), it is however indisputable that in nature, even with the change of season, the cacti do not stay for whole months in the dark (or almost). At most, they receive less light due to the shortening of the days and the different incidence of the sun’s rays.

It is no coincidence that over the years I have verified that between plants that have overwintered in dimly lit areas and plants that have overwintered in environments exposed to maximum light even in winter (for example those kept in a greenhouse) there is a big difference in terms of flowering. Based on my experience, plants kept in the dark, bloom more hardly or not at all, while those held in bright areas even during the winter bloom abundantly and without any problem.

I have verified it in particular with the genus Notocactus (now called Parodia), according to many of the easiest to cultivate and among the most prone to flowering. For years, when I still didn’t have a greenhouse and in winter I had to repair the plants in a closed terrace exposed to the North, I had failed blooms if not even non-existent, in particular with this genus. Since I had the opportunity to transfer all my plants in my big greenhouse in the country side, all my Notocactus (as well as all other genera I grow) bloom punctually and generously.

Winter rest, cold, light are primary factors for the flowering of cacti. To these is added this factor if we want to take for granted but equally important: a correct cultivation in the year before the vegetative recovery. Plants that during the vegetative season have grown stunted, or have not grown at all or plants that have had problems with pests and fungal diseases will obviously have to think before recovering, rather than flowering. In other words, the cacti that during the previous vegetative season have struggled to survive may require more time to dedicate to the recovery, concentrating the energies, for example, on the reconstitution of the radical apparatus. Stressed, dilapidated plants, blocked by a repotting carried out maybe in an inconvenient moment, in short, could be more about their health than about flowering.

Be careful, though: talking about flowering, this is by no means a rule. Let’s say rather a highly probable situation. I have, in fact, happened to see more than once plants in bad condition produce a beautiful bloom. In these cases, the stressed plants have begun to recover appreciably once the flowering has finished, thanks to proper cultivation based on regular watering, few fertilizations and the appropriate exposure to the sun (which should never be directed for plants in distress!).

Finally, two words about fertilization. Indeed, fertilization also helps in blooms, but I must say that I am quite thrifty with fertilizations. I do few and low dosages, but I think that if you use poor soils in humus (as I usually have) the fertilizations are useful for the purpose of a rich flowering. With the fertilizer, in fact, is going to adjust the soil, which for cultivation in a pot is available in limited quantities, adding those elements that with time and watering are gradually lost.

For more information on the relationship between fertilization and flowering, you can read my specific post at this link.