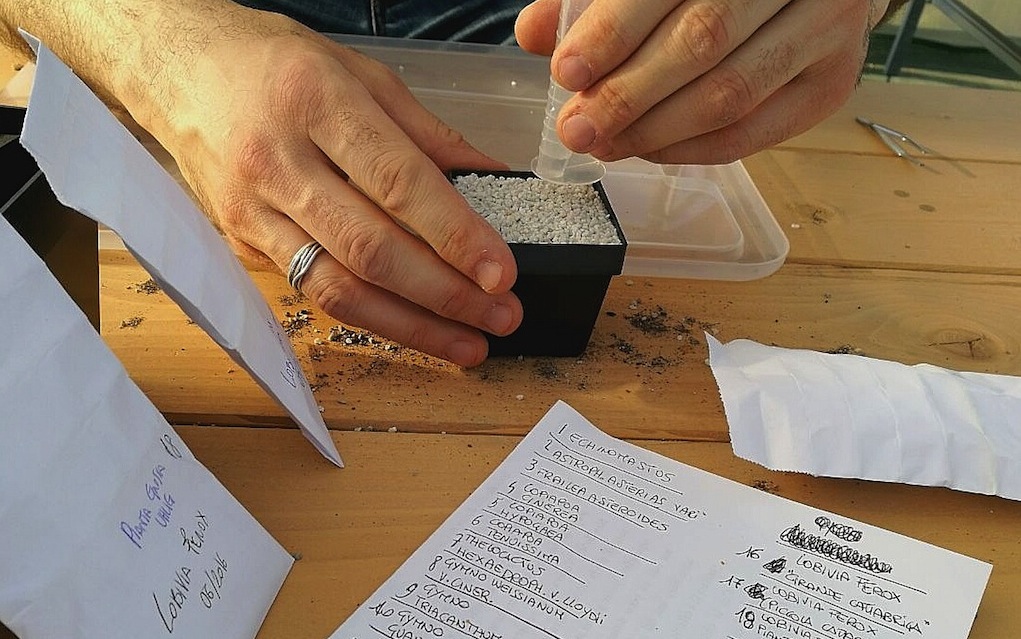 I confess: I do not have the skills nor the desire to build an artificial propagator. You can find detailed instructions and all the necessary information online, but I’ve never put myself there. This doesn’t mean that you can’t achieve good results even with traditional seeding. For over fifteen years, in fact, I have been sowing in spring with natural light and heat, using the classic “method of the bag”. I sow above all Cactaceae and, at the cost to being banal, I fully confirm what all plant lovers can tell you: it is from sowing that we can get the most satisfaction if we have this “disease” of cultivation. Moreover, it is only by the sowing that we can appreciate the different stages of development of a plant, follow its evolution from birth to flowering (a small-big event!), and get specimens able to adapt from the beginning to the conditions we can give them for the rest of life.

For myself, another basilar aspect of sowing is that in this way I can have more specimens of the same species and genus, born in the same conditions, on which to test different growing regimes. In short, you start all, democratically, from the same point, then you see who arrives and how he arrives through different soils, different exposures, and so on. In short, different cultivation practices. So it’s clear that since the starting point is the same (the seed, which obviously must come from the same fruit) if the plants after a few years show significant differences between them, this will be mainly due to the different soil, the exposure, the irrigation and fertilization regimes used. And from this, empirically, useful lessons can be drawn.

From seeds to the right soil

Usually, I used to buy seeds on the Internet from producers as well known and reliable as possible. It did not always go well for me, more than once I had disastrous sowings with seeds bought from renowned retailers. In recent years I have decided to do it by myself, pollinating my plants directly and trying to avoid crossbreeding by protecting the flowers from the excessive zeal of the bees that abound in my greenhouse.

A warning: to have more guarantees of germinability, the seeds must be fresh (let’s say from the previous year, even if there are seeds that germinate after two or three years and even more) and well preserved. This means that they must be cleaned from pulp residues and that in winter they must be kept cold but not wet.

A trick to push germination? Some people suggest, a few months before sowing, to put the seeds in the refrigerator or even in the freezer during the night and then take them out during the day, thus subjecting them to drastic temperature changes. I did it for few years, but honestly, I can’t say if this helped germination or not: I don’t think I had particularly significant results compared to the years when I didn’t adopt this sort of “stratification” (as they call this procedure).

THE MATERIAL  – I use bags with pressure closure buying new ones every year, 5 cm pots (where I put up to twenty seeds), specific fungicide for seedlings (Propamocarb), demineralized water and disinfected soil. Generally, just before sowing, I keep the seeds for about twenty minutes soaking them in water and Amuchina (a common disinfectant) to sterilize them too.

THE SOIL  – Here the matter becomes complicated. Some recommend sowing in inert soil to avoid fungal infestations, some other say they use some peat to give plants a bit of organic from birth, some who also use field soil … I tried everything, even sowing in an almost exclusively peaty loam: I did not lose the seedlings for the mushrooms, but the peat has created a surface crust that in fact has asphyxiated nearly all the seedlings.

In recent years I have switched to a mixture based on pumice in small size, sand, 20% peat and quartzite. It is the mix that has given me the best results so far. I prepare the soil and sterilize it in the oven at 200 Celsius degrees for half an hour. It is true that in this way you kill even the “good” bacteria, but I prefer not to take risks. Once I open the bags (usually at least a month and a half from when the seedlings have come out) I will start to add small amounts of fertilizer to the watering water to help the seedlings grow.

If you think seeding is an exact science, watch this video. Considering the results, I would say that even for the sowing of cacti and succulent plants the classic “as long as it works” is still a timeless motto.

The period and the procedure

It’s not always easy to get the best week right. The weather can screw you dramatically by dragging you from the illusory spring heat to the tail of a winter that still means its own. Let’s say that here in North Italy in principle I sow at the end of March-April, when the hours of light begin to be sufficient and when the night temperatures do not fall below 15-16 Celsius degrees. Very useful for germination are the temperature changes between day and night.

HOW TO PROCEED  – I prepare the soil and, apart from that, a tin foil with quartzite that I will use for the surface layer, and sterilize everything. Once the materials have cooled down, I fill the pots by holding a layer of quartzite of about half a centimetre on the surface. At that point, I put the seeds in the central groove of a piece of paper folded in half, and I drop them into the little pots using a toothpick and trying to distance the seeds as much as possible between them. A valid norm is to tap the jar slightly on the table to bring the seeds down a bit between the quartzite grains. If the seeds are big (e.g. those of Opuntia or Astrophytum) I cover them with another thin layer of quartzite.

I repeat this operation for each species, taking care to write a number on each jar with an indelible marker and to write the number and the corresponding species on a sheet of paper. In this way, I create a map of what I sowed, and I can understand what plant it is since the first time it comes out of the quartzite. So in this way, I get an idea of what that huge Echinocactus is like, for example, when it is just a “baby”…

After the distribution of the seeds, I put all the pots in a container in which I pour demineralized water with low-dose fungicide (read the package and lower a little the dosage recommended by the manufacturers) and leave the pots soaking for at least four or five hours. Sometimes even a whole night because the soil, after being “baked” in the oven, it’s very dry and the materials need time to rehydrate and wet the compost in depth.

As the last step, I take the pots one by one, let them drain a little and put them in individual bags. I close well the bags and always leave a little water at the bottom of it because the very high moisture content is required for germination.

Where to place the pots

I keep the jars in rectangular saucers or in transparent boxes, and over the years, I have often changed the place where I sowed. Sometimes it seemed to me that there was too much light, sometimes too little. What is certain is that the seeds do not go to direct sunlight, which would inhibit germination or boil the seedlings. We need a position in the “mid-shade” – lovely definition, don’t you think? The mid-shade is so variable that I have seen and heard everything. In recent years I have had good results putting the containers with the jars in the greenhouse, at the bottom, next to the pallet. They get light early in the morning and from the afternoon they are in the shade of the opposite pallet.

What to do when the plants are born

Some species take a few days to germinate, others take two or three weeks. Others will betray you because they will never be born. It happened to me often, and I’ve got jars literally full of seedlings and others in which not even was born a seaweed. You have to accept it, and maybe that’s also the beauty of sowing in a natural way. In any case, once the seeds have germinated, I keep the bags closed for another month and a half (sometimes even two months), guaranteeing the seedlings highest humidity.

After this time, I open the bags a little bit a day (it is better not to open them at once if we want to avoid sudden changes in temperature of the seedlings). Within a week/ten days, the bags will be opened completely. From that moment I take the seedlings out, leave the pots exactly where they are for at least two months and water them often, preventing the soil from drying out completely. I always water from below, by imbibition, and not from above because you risk to sweep away the seedlings, still not deeply rooted and still too small. When the plants are four months old, I start to give them a little more light hours (always indirect) and add low doses of fertilizer to the water.

If the seedlings are not blocked in their growth, in the autumn I have well-formed seedlings that can cope with the winter as adult plants do, i.e. in the cold and without water since October.

THE PRICKING-OUT  – Some recommend to pricking-out (repot planting in larger pots) the seedlings already after the first six months of life; others say not to touch them for at least a year. I tried to do both things, and I’ve realized that both work. However, I have had seedlings that have accelerated growth since the pricking-out and others that have stalled development, and this happened whether I flared them after six months or after a year. As a general method, for convenience, I leave the seedlings in the seedling pot for the first year unless they are so thick and swollen that they push each other. In this case, I have seen that growth can slow down and early repotting helps.

My video about sowing

In this video, you can see the main steps of cactus sowing:

You may also be interested in “How to repot cactus“, or “Identify and classify succulent plants“.

error: Testi e foto coperti da diritto d\\\\\\\'autore. Vietata la riproduzione.
wpDiscuz
0
0
Scrivi il tuo commentox
()
x
| Reply
"Il fiore tra le spine" uses cookies to make sure you can have the best experience on this site. If you continue to use this site we will assume that you are happy with it. Thanks!Ok