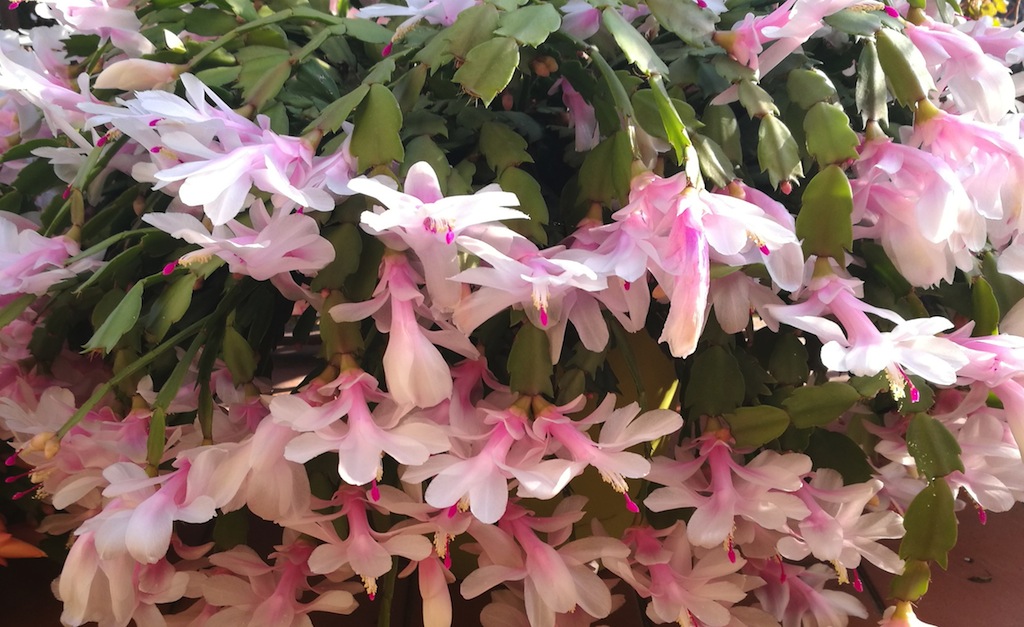 As every year, between the end of November and the first half of December, my Schlumbergera blooms. As always, the blossoms are very abundant, with inflorescences on every “article” of the plants. These are very common, thornless cacti that I consider a classic “houseplant”, but no less interesting, than other genera. Let’s start by saying that Schlumbergera are for all intents and purposes cacti (family Cactaceae). They are epiphytic succulent plants that in nature live leaning on other plants that simply act as a support (epiphytes are therefore not parasitic plants). This genus, also commercially known as “Christmas cactus” because they bloom at this time of year (actually they bloom from November), is very beloved even among non-succulent enthusiasts.

In this article, we’ll learn how to cultivate the “Christmas Cactus”, for obtaining its abundant blooms without any problems.

Schlumbergera is, in fact, a very popular houseplant during its flowering period, also because it’s very decorative and hardy, and its flowers are persistent: they can last a couple of weeks or more, which for a cactus is quite a long time. On the market, you can find specimens with blooms of almost every shade, from fuchsia to red, to pink, white, yellow or orange: the endless hybridizations for the commercialization of these plants have led to an almost infinite range of colours.

Schlumbergera are native to South America, in particular to Brazil. This implies that these plants are not able to bear too low temperatures. They like minimums of no less than 7/10 degrees.

Here you can find an article about the distribution of cacti and succulents in the world.

Their cultivation is quite simple. When the plant produces new “articles” during the growing season, it’s better to keep Schlumbergera outdoors. It’s better if in a bright place, not exposed to direct sunlight. In fact, in-kind these cacti live in the shelter of leafy plants, so that light reaches them shielded.

The soil must be, as always, well-draining, but lusher than the ideal soil for most cacti. For these plants, 70% of peat or universal soil and 30% of inert material (sand, gravel, pumice) can be enough. When we buy them, these plants are in a soil consisting exclusively of peat, just like most cacti from nurseries that do not specialize in succulents or cacti. However, if for all other cacti it is a good idea to remove the peat and thoroughly clean the root system and then repot in proper soil, for Schlumbergera it can be difficult and often disastrous. The root system of these succulents is, in fact, contained and formed by thin roots, and a careful cleaning could seriously damage it, with the result, moreover, that the various “stems” that make up the plant would not be more stable once placed in the new substrate. For this reason, making an exception to the usual procedure, with this plant I simply remove the old pot, shake out a bit the soil to remove excess peat (without breaking the root block) and repot in larger pots with more draining soil.

Watering must be regular in spring and summer (be careful, however, to stagnate, since it uses a mainly peaty soil) and very spaced in autumn/winter. In summary, we can say that the substrate must be almost always wet, except in winter, when it can be left to dry well between one watering and the other.
During the winter months, you can keep the plants at home, keeping them warm, or, even better, in little heated and luminous rooms.

From the first half of November, at least on the two specimens, I have had for several years, buds begin to form, which open in the first weeks of December. It’s commonly said that Schlumbergera, once they have started to produce buds, should not be moved because they will lose their bloom. From what I’ve been able to verify, the warning is not entirely unfounded, at least during the initial stage of bud formation. In the past, it happened to me to bring a Schlumbergera indoors and see it loose all of its buds within a few weeks. For the past few years, I’ve taken the plants indoors only when the buds are about halfway through their formation: they settle in smoothly and bloom abundantly.

For flowering, in any case, the general rules for cacti apply proper cultivation and winter rest, with the difference that Schlumbergera must be overwintered at temperatures not too low and with sporadic watering even in the coldest months.

The multiplication by cuttings of these cacti is quite simple: in spring it is enough to detach a well-formed article and place it on the sand, nebulizing from time to time. After a few weeks, the first roots will sprout, and the new plant will begin to develop. When the roots become sufficiently formed, it can be repotted in suitable potting soil.

You may also be interested in “How to repot cactus“, or “Identify and classify succulent plants“.

error: Testi e foto coperti da diritto d\\\\\\\'autore. Vietata la riproduzione.
wpDiscuz
0
0
Scrivi il tuo commentox
()
x
| Reply
"Il fiore tra le spine" uses cookies to make sure you can have the best experience on this site. If you continue to use this site we will assume that you are happy with it. Thanks!Ok