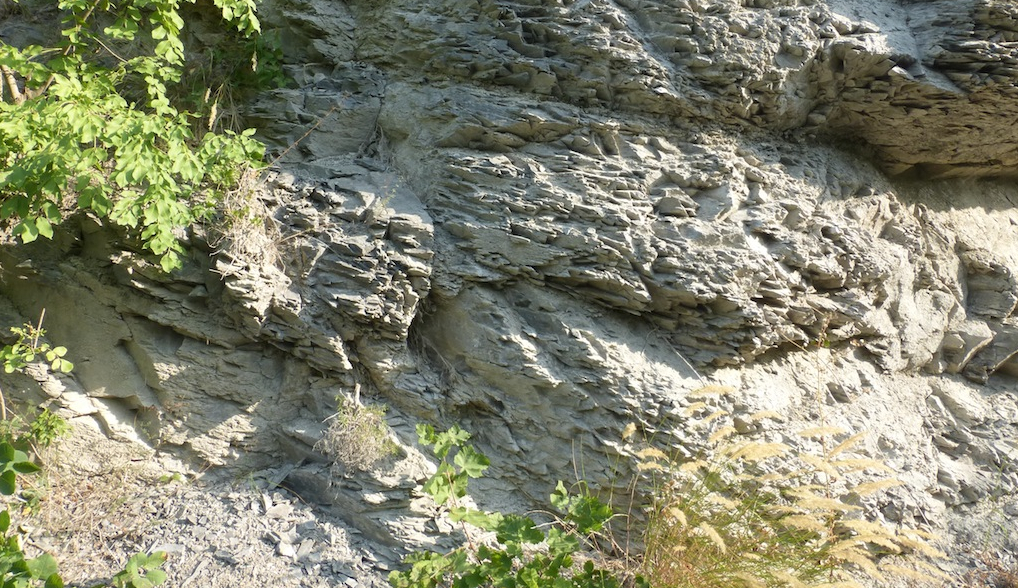 The use of marl as a substrate component for the cacti’s cultivation has been widespread for years, especially in Italy. Thanks to the studies and research conducted by my friend Andrea Cattabriga – grower, researcher and succulent expert at the international level. But what are we talking about, when we discuss marl? Quite simply, a greyish and highly friable rock, to the point of breaking up into flakes until it becomes powder. It’s used to create substrates for the cultivation of many cacti and some succulent plants when combined in some dosages with other materials such as quartzite, pumice, sand, gravel, lapilli, peat, field soil (clay).

In this article we explore the benefits of using marl in cactus cultivation, we see how to make a valid marl-based substrate, and we try to understand, above all, with which kinds of cacti this material can work and with which ones it should be avoided. (…)

For those who want a more precise definition of marl, I report the description that Cattabriga wrote some time ago in his site, Mondocactus: “Marl is a disintegrated terrigenous rock, which decomposes to form an earthy matrix, composed mainly of clay made compact by the infiltration of various minerals, especially calcium carbonate, dolomite or, more rarely, silica“.

Initially known by few people, over the past decade marl has gained high regard among cacti enthusiasts. Some of them see in this material the base of the perfect substrate for the cultivation of many kinds of cacti; others use it pure, i.e. without the addition of inert or organic material (e.g. peat or earthworm humus). Others still appreciate its properties only up to a certain point, admitting some merits and at the same time preferring other materials, such as limestone (which is a marly limestone).

Until a few years ago, finding marl was a big deal (in this regard, it should be remembered that the removal of material from the wild in certain areas is prohibited), but today it’s possible (actually, not so easily) to find it for sale at some retailers of materials for the cultivation of succulents or plants in general. This also shows that the use of marl has become very trendy among succulent growers over time.

Is it the perfect material for cacti?

So, how things really are? Is marl really the “boon” to cactophiles looking for the perfect soil? As always, the answer to these questions is “it depends”. It depends on many factors that, in addition to the substrate, influence the plants’ growth. It also depends on the type of cultivation we adopt and the result we want to obtain: slow-growing plants similar to those in the habitat or fast-growing plants, swollen and without a scratch?

Without entering into the various cultivation “philosophies” (you can find mine here, if you want to have the first idea and if you have heard of “wild” cultivation), let’s clarify a key element: just like field soil, there’s no “one only” kind of marl. There are infinite varieties and types of marl. Depending on where this rock was formed, we can have marls more or less clayey, marls that are more or less siliceous, marls that are more or less rich in calcium carbonate, and so on. Even the marl’s colour can vary depending on the elements that make it up and can range from dark grey to light grey, up to whitish.

And if it’s true that only some kinds of cacti like marl-based substrates (among them, Ariocarpus, Pelecyphora, Epithelantha, many Ferocactus, many Mammillaria, some Turbinicarpus, some Astrophytum, almost all Stenocactus and some Echinocactus), then that not all kinds of marl are valid or give the same results. Indicating the correct match between cacti genera and marl types is impossible: the variables are infinite, and the only way to understand what kind of marl works for a specific plant is, as always, direct experimentation. In other words, the cultivation with identical methods (light, water, temperature, etc..) of several specimens of a given species obtained from the same sowing but placed in different potting soils, made with various types of marl and with higher or lower percentages of marl. Only by noting down everything and cultivating in this way for some years, since it takes a high amount of time to get reliable results, it’s possible to have reliable and correct data.

With which plants it works and with which it doesn’t

I have been using marl for at least twelve years: I have tried many types, and I have used it in many percentages in my substrates. In some instances, I’ve used it pure, in other in low dosages (20%). In most situations, with adult plants, I use it in percentages not lower than 50%. However, with seedlings, I’ve learned that it’s better to limit the proportion of marl in the substrate of 15-20% as maximum. In fact, from what I have observed in these years of experimentation, the marl (at least the type I use, which comes from the Apennines of Emilia, North Italy) is the ideal substrate for many kinds of cacti. Plants cultivated in marl grow slower than those grown in traditional potting soils (e.g. pumice, lapilli and peat in equal parts), but maintain a more compact appearance and produce better, thicker and harder spines. Also, and this is no small thing, plants grown in marl are rarely attacked by root rot: this happens because marl is draining, contains no organic material and dries quickly after watering.

From my direct observation, the genera that grow better in marl are: Ariocarpus (for adult specimens, you can use it pure); Epithelantha (with marl percentages around 70% these plants grow slowly but remain rounded); Pelecyphora; Turbinicarpus (above all the lophophoroides species, which also likes an addition of chalk and keeps the stem compact); Geohintonia (with a supplement of natural chalk); almost all “white” Mammillaria (for example, the lasiacantha group); several Ferocactus (I have used it with acanthodes, schwarzii, latispinus, chrysacanthus and gracilis x chrysacanthus); Stenocactus; some Astrophytum species (myriostigma and asterias); some Thelocactus (bicolour and hexaedrophorus lloydii); some Coryphantha (kracikii and retusa); some Echinocactus species (horizonthalonius, texensis and platyacanthus).

Years ago, also I did some experiments with the Copiapoa genus, although these plants in the wild do not grow in marly soils. I have cultivated (and I still do) a few Copiapoa cinerea specimens in substrates with 50% marl and 50% aggregate (gravel, pumice, sand), or in a mix of marl (20%), standard clayey field soil (20%) and gravel: they grow very slowly but overall develop more bloom (that characteristic wax on the stem) than specimens grown in other types of substrate.

At this link, you can find my article on Copiapoa Cinerea cultivation in marl published some time ago by the magazine Xerophilia.

Plants that, in my experience, do not like marl at all are Gymnocalycium, which in fact grow in rich soils from the organic point of view, as well as, for example, Parodia, Lobivia and Echinopsis (on these three genera, however, I have never tried the cultivation in marl, even in low percentages). Similarly, it is good to avoid marl with young specimens of any kind: the growth is slowed down, and in many cases, the young plants stop, as happened to me with several Echinocactus texensis and horizonthalonius.

In summary, based on my experience and comparison with other growers, I can say that marl is not, tout court, the solution to all problems related to the substrate for cacti. Having said that, if we know at least briefly its characteristics, and if we know with which plants this material interacts correctly, we can undoubtedly affirm that marl is an excellent material for the cultivation of many cacti and in particular one of the best materials for those who seek to obtain specimens that look similar to those that grow in their habitat.

Word to the expert

For those who want to deepen the topic, Andrea Cattabriga’s experience is very inspiring. Interviewed by this website in 2018, he told how he discovered the marl and his impressions about the use of it in the cacti’s cultivation. Below is an excerpt from the interview published on the italian version of Il fiore tra le spine.

How did you discover marl?

For years, while scouring the Apennines in search of minerals and fossils, I had come across deposits of curiously friable and light-coloured rocks, so similar to those among which Ariocarpus grew in the photos reproduced in the volumes of “Die Cactaceae” by Curt Backeberg that I could consult at the Institute of Agriculture. I tried to grow some plants on them with mediocre success, but when I made my first trip to the Mexican mountains and found myself among the same rocks, I had the impression that there might be something more than a similarity between those materials. So I checked the geological maps of Mexico and learned that those limestone mountains had had a similar genesis to those of the Apennines, i.e. they were born from the emersion of sedimentary rocks of marine origin generated by the slow sedimentation of fine particles, mainly clay (the so-called turbidites).
Back in Italy, I began to collect different marls, paying more attention to mix coarse and fine parts homogeneously, and I obtained increasingly encouraging results. I recently discovered marl is considered a material that improves the characteristics of agricultural soils. Slowfood’s website states that marly soil “delays the ripening of grapes and increases their acidity. It is present in many viticultural areas of great value“. I’ve found other significative quotes about the benefits of marl in an old Neapolitan agrarian text written at the end of 1800, it’s mentioned its capacity to increase the fertility of soils. I also discovered on the geological maps that in the deposit I identified the marl is siliceous, which is relevant because most marls are calcareous, and therefore incorporate calcium carbonate which is not always appreciated by plants.  Today, when I can, I collect marls in large compact blocks that I grind to obtain different grain sizes, from fine powder to 3-5 cm diameter fragments. I’m really pleased with the response to my plants.

What evidence have you drawn from the use of this particular soil and with which plants have you noticed it works best?

Basically, the effect of using marl (which I’ve used purely for years) is, in my opinion, the total containment of the hypertrophy that usually occurs in succulents by absorbing the nitrogen present in the soil, however little it is.  Please note that I fertilize all plants with various fertilizers, so I also give nitrogen, but if a plant is grown on peat or lapillus, the nitrogen causes development to a more conspicuous mass of considerable aqueous parenchyma’s cells. The tubercles of Ariocarpus become larger and more intensely green, and the stems of Mammillarias and Ferocactus grow wider, while the spines become thinner and the down of the areoles is reduced… In that sense, the plants that respond fully to the use of this material are Ariocarpus, Pelecyphora and Epithelantha, but also Mammillaria, Ferocactus, Echinocactus (especially Horizonthalonius and Latispinus) and Stenocactus respond magnificently to cultivation on marl. To be avoided is the use with columnar plants, which have no way to expand their roots as it happens in nature, so they go in crisis very quickly if grown on this material.

How to repot cacti and succulent plants

Substrates for cacti and succulents

The correct soil: the materials you can use