When they say that a picture is better than words. In this case, there are three photos, but the concept doesn’t change, and the difference between a cactus grown in a “natural” (or “wild”) way and one with a “garden-style”, based on basic notions and beliefs is quite evident. The plants I’m writing about are Ferocactus latispinus obtained from a 2012 sowing of mine. From that same planting, I’ve got at least forty plants. Over the years, I have given away some of them, but most are still with me and are growing beautifully. It’s important to point out that these are plants born from seeds contained in a single fruit (gift of a dear friend), sown the same day and grown over the years in the same conditions, i.e. in my greenhouse, in standard soil (pumice, lapilli and peat in equal parts), watered and fertilized with the same frequency. This is to say that the starting conditions, including the genetics and the grower’s hand, are the same. And yet, as you can see from the photo above, where the three plants (three at random of the twenty-five or so that I have kept for myself) are side by side, they show remarkable differences, at least to the discerning eye and the grower with a minimum of experience.

So let’s see how and why different cultivation regimens, assumed as a whole and not just limited to the soil, affect so much the final result and really make the difference between a cactus grown and cultivated in any garden or generic nursery and a cactus grown by an enthusiast or an expert.

First of all is the choice of plant, namely Ferocactus latispinus. It’s a cactus easy to grow, there is no doubt about that. The problem is to get the plant, cultivated here in Italy or in Europe, to produce that impressive thorns it shows in its natural habitat, the central and southern area of Mexico. Certainly, genetics is determinant, and we can, in fact, find latispinus with more or less wide, long and thick thorns even in nature. But this factor is not decisive because even with a solid genetic background, in the latitude where I live latispinus struggle to produce thorns similar to those of plants in habitat.

Italian expert Giuseppe Lodi, even, in his book “Le mie piante grasse”(Edagricole), advises against their cultivation: “(…) even with all the sunshine we can give them, they remain far away, in appearance and thorns, from the natural plants of the desert“, he notes. Now, it’s true that the plants in habitat will always have more massive thorns than those of our specimens, but with the right cultivation, experience and good exposure, it’s possible to obtain very tangible results even at my latitudes (North of Italy).

As for my plants and this “experiment”, let’s say that chance prevailed. Years ago, a friend gave me a latispinus fruit rich in seeds. In 2012 I sowed, and many plants were born. I increased that plants’ exposure to the sun, up to four years ago, keeping them in full sun, outside the greenhouse. Here my latispinus receive direct sun from 9:30 am until sunset and are exposed to all weather conditions from late March until mid-October. Over the past three years, I have been pleased to note that all the plants from that planting have developed astonish thorns, improving year after year, to the point that their overall appearance is much better than most latispinus specimens I have seen for sale over the years, both in generic gardens and at specialized nurseries.

The merit is from the plant’s genetics but, I think, also from the proper cultivation. Also because, owing to several specimens, recently I’ve could test these plants, both from the substrates’ point of view and from that relating to exposure, watering, fertilizing.

That said, we come to this particular piece, whose conception was born by chance from a trivial comparison between some of my photographs:
in fact, at the end of March 2020, due to lockdown caused by Covid-19, I wanted to bring home a couple of my cacti. My greenhouse is located outside of the municipality where I live and having realized that I couldn’t get to it for several weeks, I decided to bring a couple of my seedlings to my balcony just so I could watch them grow. One of the two plants was a Ferocactus latispinus born from that 2012 sowing. I placed it on the balcony of my house, where it gets direct sun only from 8am to 3pm, and treated it like any other garden succulent plant just to see what differences it would develop compared to its “brothers” in the greenhouse (or rather, just outside the greenhouse, exposed to sun and weather). So I watered it often (once every ten days, while the specimens outside the greenhouse were only exposed to the rainy days), I fertilized it at least four or five times with generic fertilizer (the plants I keep in the greenhouse are fertilized twice a year at most and with a specific product), and I made a preventive treatment against parasites. Nothing really “wild” as you can see.

Warning: I want to clarify that I’ve nothing against the cacti sold in generic gardens: the point is that for obvious reasons related to the lack of specialization in care, after a few months this kind of cacti will certainly not have a “wild” or natural look, also because they are plants intended for intensive sales and therefore pushed, forced to quickly growing, fertilized a lot and kept in vegetation even in winter.

Well, going back to my experiment, almost five months later the results of different cultivation can be seen very well: the plant grown on the balcony is the last one in the picture above, under the title, on the far right (or PHOTO 3 at the end of the article, where you can see it single and large). As you can see, compared to the other two plants, the stem is very swollen, “pumped up” by fertilization and frequent watering; the colour of the epidermis is bright green because of the nitrogen contained in the fertilizer and the thorns, more vivid red than the other specimens, are much shorter, narrower and less thick. In other words, the plant is decidedly less similar to the Ferocactus latispinus growing in their habitat.

On the other hand, the other two specimens – two chosen at random among those left outside the greenhouse – have a very different look. The first one, on the far left of the photo above (or PHOTO 1 at the end of the article), is, in my opinion, the most beautiful: the stem is not swollen at all, and the colour is much more natural. The spines… well, there’s no comparison: in this case, they are much longer, wider and thicker and their colour is more “faded” and tending to yellowish, more natural indeed.

Similar speech has to be assumed for the second plant, the one at the centre of the photo above (or PHOTO 2 at the end of the article), that stayed out of the greenhouse during these months: it had a more natural stem and better thorns than the specimen cultivated on the balcony. I think the first plant is the best and this despite having received the same care as the second: it remained outside the greenhouse receiving the same amount of sun, it only drank when it rained, was fertilized only once and treated once against parasites.

The difference between the first and second plant? The substrate. The first plant grows in a soil made of gravel and sand, non-calcareous clay field soil, a little natural gypsum and pieces of limestone rock. However, the second one is in the same soil in which the one grown on the balcony grows: pumice, lapilli and peat in equal parts. The three plants’ dimension is similar: the first is in a 14 centimetres square pot while the second and the third are in 17 centimetres bowls.

All three latispinus were repotted two years ago. Finally, all three plants spent the winter in the greenhouse as did all my other cacti, with lows around zero degrees, and dry from late September through April. Yet the differences now are remarkable, at least as far as the home-grown plant is concerned. All this happened in just a few months because it should be remembered that these three plants started from the same conditions. At the end of March showed no distinction from an aesthetic point of view that I chose one at random, among my many latispinus, to take out of the greenhouse. It’s quite impressive to see how quickly it’s possible to distort the appearance of a plant, making it go from a natural-looking specimen to a pumped-up looking, with little or no resemblance to plants in the wild.

A last note: considering the plant’s growth rate in these months on the balcony, those plants are grown in a “natural” or “wild” way have much slower growth. This is well known: but the point is that obviously, thanks to this factor, they can respect their natural rhythm and thus maintain a much more natural appearance than specimens gorged with water and nitrogen fertilizer, which certainly develop less defence against possible attacks by parasites or bacteria. On the other hand, the evident differences of the specimen cultivated at home are due to an accelerated growth, forced, pushed, compared to one of that one’s left in greenhouses, almost totally entrusted to nature.

More natural appearance also means more “lived” (“wild”, we can say…) appearance, because plants grown in the countryside, exposed to the weather, benefit from much more air, which has evident effects on the thorns. I have noticed this on other plants as well: the thorns take on different and more nuanced colours, in addition to growing more sturdy, perhaps due to a sort of “oxidation”? More “lived” appearance means to have a stem that may show marks from the sun, or from “living” with weeds.

It’s also a matter of taste, of course, but when I looked at the photo of the Ferocactus grown at home, I couldn’t help but think of supermarket or garden plants and the differences with the cacti I grow “wild” in greenhouses and, even more, with those seen in habitats.

In conclusion, for the proper growth of cacti the substrate is decisive, but overall, to make the real difference is the full cultivation regime: air, light, temperature, watering, fertilization, treatments, etc… I think the example of two latispinus grown in the same substrate (lapillus, pumice, peat), one in the countryside, the other on a balcony, with very different treatments, is very indicative. If we consider even the plant on the first photo, grown in the soil more suitable, the picture is complete.

For those who want to get an idea of what cacti are like in habitat (cacti in the wild!), maybe waiting for a trip to Mexico, a Google overview could help a lot…

If you want to read the description of another cultivation experiment of mine, with six identical plants in three different types of soil, you can go to this link. 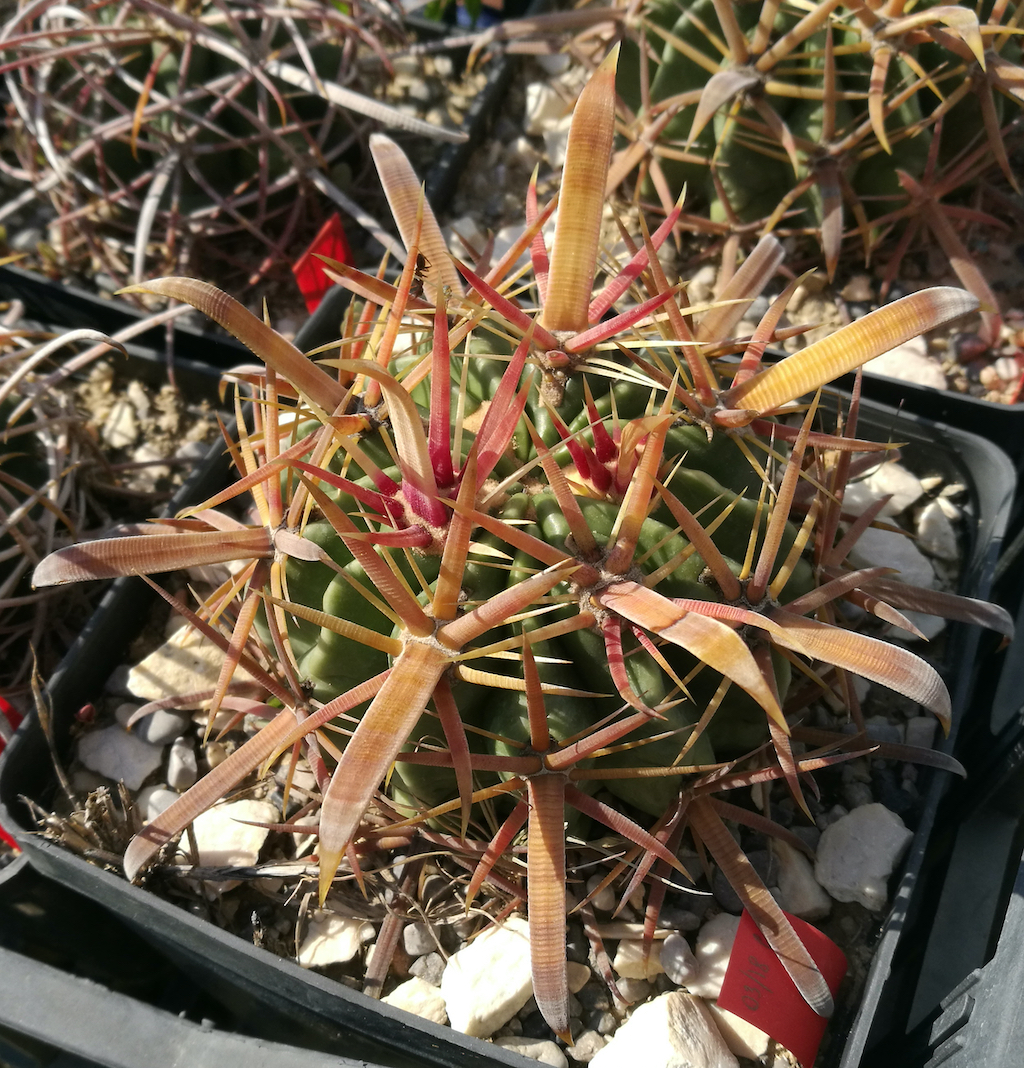 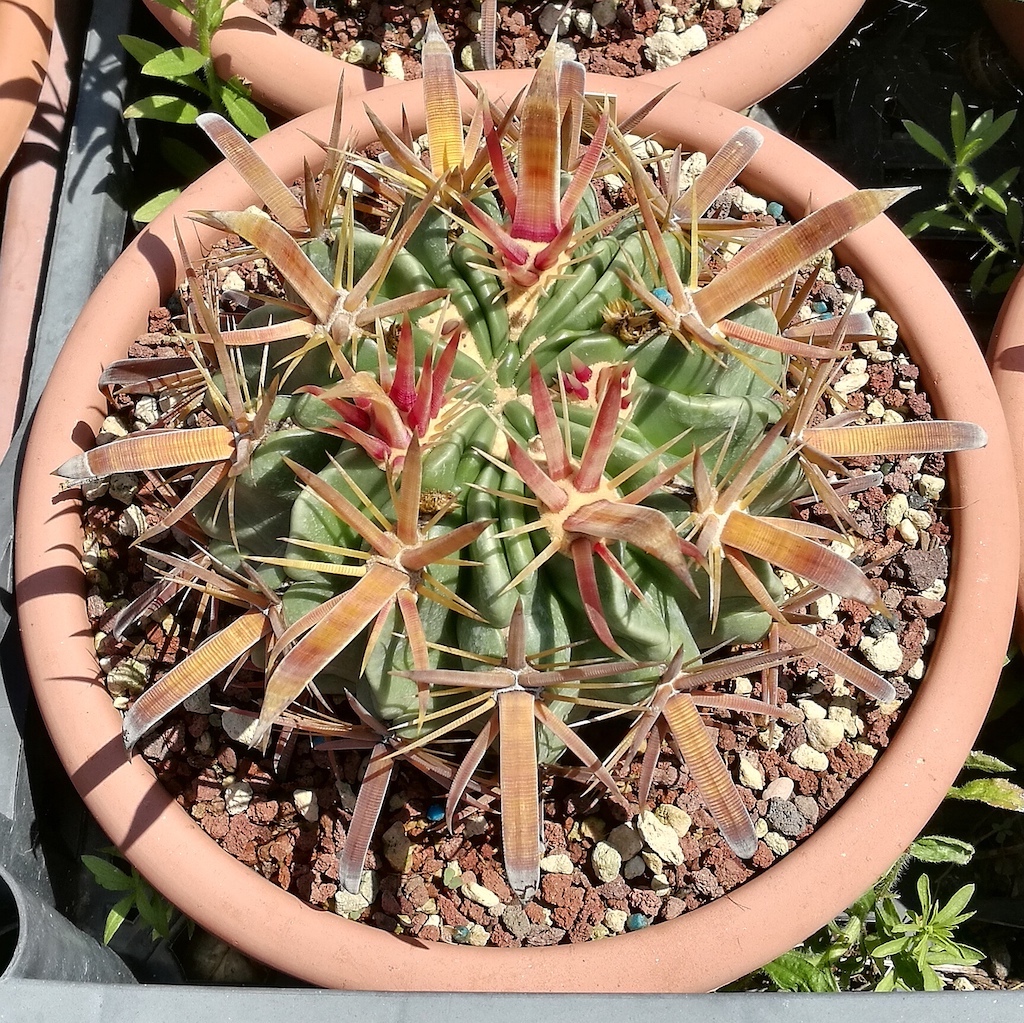 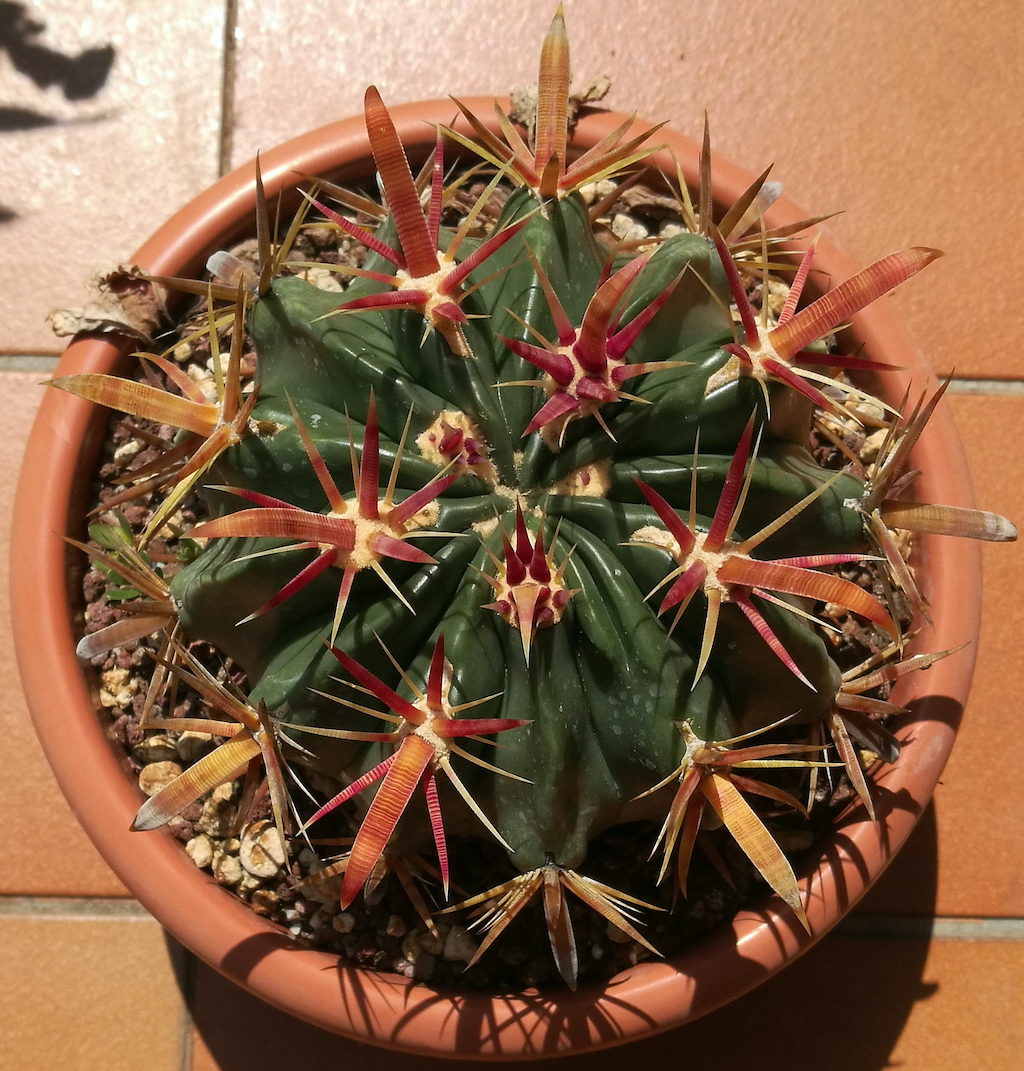