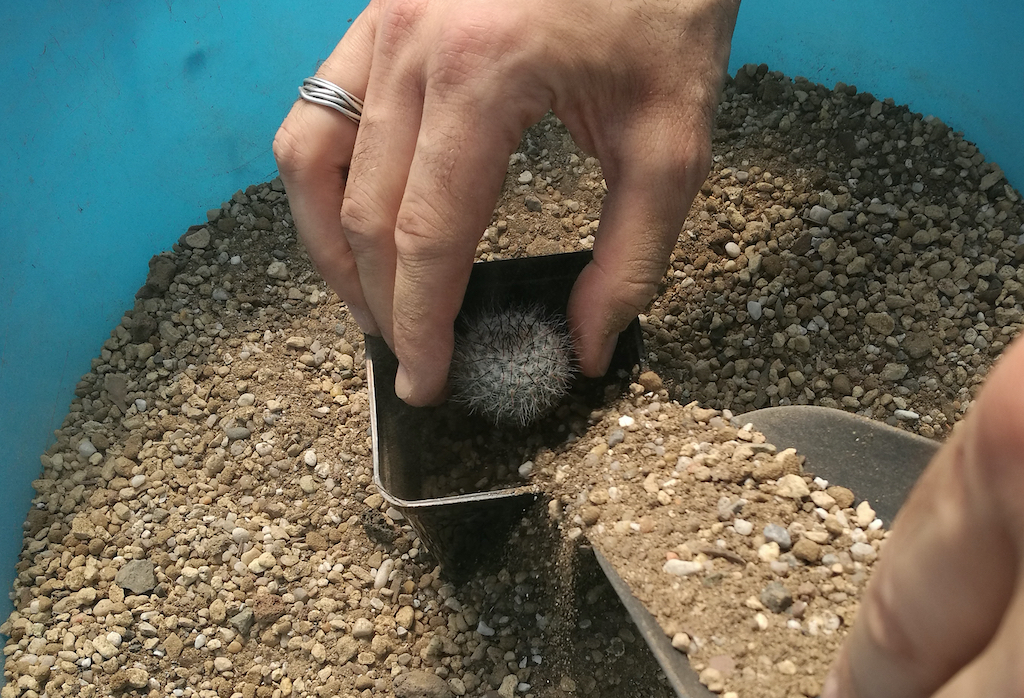 Here is another test of mine. In the cultivation of cacti, a bit like with many other passions in life, there are two different approaches: a “static” approach, let’s say “contemplative” and “collecting”, and a “dynamic” one, experimental and inspired by an ever greater understanding of these plants. In this second approach (which is the one that has inspired my passion for years) the study of reliable texts, the comparison with other growers and, above all, the experimentation in the field, for example, working on potting media, exposure, cultivation techniques and more, are fundamental.

Just growing plants – succulent or not – for years and years, in the same way, never changing the type of soil, exposure or method of cultivation is fine, mind you. Clearly, it’s perfect for those who only appreciate plants from an aesthetic or collecting point of view and have no particular demands. In short, it’s valid for those who are not interested in learning more and are not willing to take risks to improve and better understand the plants themselves.

Instead, the aim of “wild” cultivation is to obtain specimens as robust as possible, and with the same look to those that grow in the habitat (I write about this cultivation’s philosophy here). In addition to the documentation and possibly travel to observe the plants in nature, it is essential to engage in some experiments and be willing to question continuously, even if it could lose some specimens (not the valuable ones, of course).

One of the fields in which we can experiment the most is that of substrates (or potting soils). If it is true that the growth of a plant – in our case cacti or succulents – is influenced by an infinite number of factors such as exposure, temperature, watering, fertilization, etc., it is also true that the substrate is one of the elements on which we can most “indulge” to test the reactions of plants and, consequently, their growth to note everything and draw useful conclusions. Without going into the details of succulent potting soils (here you will find a series of articles dedicated to this topic), I summarize in this post a simple experiment that I have done in recent days, also related to some other “tests” on substrates that I have done over the years with other species of cacti.

It all stems from a simple visit to the local nursery in June to get some products commonly used for the greenhouse. Among the succulents that had recently arrived in large quantities from the Ligurian Riviera – common plants for a euro each – I noticed a whole plate of Mammillaria hahniana. I generally don’t buy cacti from non-specialized nurseries, and in recent years I’ve cut back on purchases considerably, preferring to sow my own plants. However, the Mammillaria were beautiful and, like all “white” Mammillaria, interesting to me.

Those seedlings, about two years old, definitely came from the same sowing: they were, in fact, of identical size (a couple of centimetres in diameter), all similar and grown in the same small pots (2.5 cm). They were cultivated in pure peat-based potting soils, like almost all plants from large production nurseries, but well-formed and proportioned, i.e. not yet over-pumped by nitrogen-based fertilization, to speed the growth.

Young, same-seeded plants are perfect for experimenting with different potting media, because the basic genetic makeup is shared and the young age means that the plants have grown in identical conditions up to that point, without developing significant differences due to, say, different watering or fertilizing regimes, exposure, and so on.

I decided to buy six specimens to start a test, even though June is not a time for repotting by my standards. On the other hand, I haven’t planted for a couple of years and having six Mammillaria to learn something new from seemed like a good opportunity, even though I have done some testing with other Mammillaria species in the past.

Once I got the plants into the greenhouse, I unplugged them and freed the root system from the pure peat they had been growing in. The peat was soaked, and I helped myself with a jet of water to thoroughly clean the roots removing any residual soil. Of course, during this operation, the peripheral rootlets went away with it, but this will not create any problem for the plants, which are young and healthy and will quickly rebuild the root system.

Once the roots were cleaned and evened out, I placed the bare-root plants on a Styrofoam base and left them in mid-shade, directly in the greenhouse, to dry. The plants stayed in this way for seven days, and even though we are in the period of full vegetation, the stem did not even hint at deflating.
After a week, with the roots perfectly dry and healed, I repotted the six Mammillaria. To avoid differences in growth influenced by the containers, I used pots of identical size for all six plants (also because the plants and the roots were of similar size): I chose square ones of 8 cm side, large compared to the stem and the root system but not disproportionate. If the growth respects regular rhythms, the Mammillaria can remain in these pots for at least 3 or 4 years without problems.

As for the potting soils, I made do with what I had available at the time. Unfortunately, this year I ran out of marl that I get directly from an area a couple of hours from home and had to give up a substrate that always works very well with white Mammillaria… To give reliability to the test, I placed two specimens for each type of soil (even more reliable results would obviously be obtained with higher numbers): I repotted two plants in a classic mix of pumice/lapillus/peat in equal parts; other two I planted in a substrate made of clay soil (30%), earthworm humus (10%) and aggregates such as pumice, sand and river gravel. On the last two specimens, I made a test completely “blind” (perhaps it would be better to define it “criminal” …), creating a soil never tried before, made “by feeling” trying to balance some elements.

I used three parts of earthworm humus (cow manure transformed by the action of earthworms) as an organic component, then I added two of pumice of small particle size (pumice is the “wild card” material to make the substrate draining and absorbs water by releasing it gradually). After that, two parts of natural gypsum (or “agricultural” gypsum, used as a soil conditioner to correct soil pH) and finally three parts of ordinary river gravel (a “pure” inert material useful for drainage and loosening the soil). As “part” I mean a scoop filled with material. In this way, I can quantify the ratios between the various materials that make up the final substrate, and understand if the healthy part is enough compared to the coarse, if the organic one is a minority or not compared to the mineral, etc…

Here is an in-depth look at the individual materials we can use to create substrates.

For each pair of plants, I have matched two cards of different colours on which I noted in pencil the composition of the soil used for the test: white card for the mix pumice/lapillus/peat, yellow card for that based on field loam and a red card for the experimental one. I usually only use white or yellow tags, but in this case, by diversifying them by potting soil, I can evaluate the plants’ growth in combination with the substrate without having to read every time what I have noted on the tag.

After having repotted, I’ve placed the six plants in their place, then I gave them an abundant misting to let the potting soil settle well on the surface and remove the excess dust. The six plants will obviously be grown identically to avoid that other factors – genetics and chance aside – can influence their growth. In other words, the Mammillaria will stay side by side in the same position in the greenhouse and will receive the same treatment in terms of temperature, light, watering, fertilization. Starting next spring, I will move them outside the greenhouse, in full sun: the white down will protect them and prevent the stem from burning, even if they are young specimens. Moving them now, in June and immediately after repotting, would be detrimental because the plants would not have time to acclimatize gradually and would end up under the rays of the already intense summer sun.

For getting the first results of this test, we have to be patient because time is the last determining factor in the plants’ growth. The first possible differences will be appreciated only after one or two years of cultivation. Based on my experience, I expect a faster growth of the two specimens in pumice/lapillus/peat, which will probably become wider and will tend to grow more in height than those in field soil, which, on the other hand, should remain more flat and compact.

The real unknown is represented by the two Mammillaria in the unusual mix, very rich from the organic point of view and at the same time “corrected” by the gypsum. We will see with time how their growth will be affected by this substrate and the general results of this test.

Here you will find an article related to another test of mine, with the comparison between Ferocactus latispinus grown in different conditions.